THE WORLD’S OLDEST PROFESSION … NOT WHAT YOU THINK!

Right now, in the time of Corona, you may be feeling anxious about the future of selling and by association concerned about your role in sales, your businesses sales performance or your customer relationships.

This is completely understandable and the exact reason why I have prepared this series for you, an entertaining trip into the recesses of history where you will learn more about the heroes, ground breakers and also the villains of our profession.

Join me on a quest to find the sources of age-old legends and discover the truth behind the myths, all the while learning about the story of selling and the salesman in each one of us. In so doing you will discover that sales is one of the few professions that has continued to evolve throughout the ages, and we have no reason to fear that we will not continue to thrive into the future.

The Story of Selling is literally as ancient as the story of mankind, and, it is far more fascinating and inspiring than most people often realize. For example, you may be surprised to learn that sales had its origins in farming.

Socrates once said, let every man specialize. Let the farmer focus on his farming and trade his wares with the shoemaker. This was a time when, if you were born in to a farming family and you grew up on a farm your fate was pretty much sealed, and you would, most likely, follow in your father’s footsteps and become a farmer yourself.

Every harvest season each farm would trade their wares at the local markets, this was open season for bartering and selling. The markets were filled with people, deals being done to the great excitement or disappointment of those who were selling their produce.

For those who grew up on the farm and were not overly enthused by the idea of another 60 years of farm life exposed to harsh weather conditions and living off the land – the idea that you could leave the farm and that your earnings were only capped by what you could sell, felt like an incredible invitation.

STEP OUT ON AN ADVENTURE

More than that it felt like a call to adventure – going on the road to sell the farms produce represented a life of, travel, business, high stakes negotiations and of course an endless variety of relationships formed with people that you would meet along the way. It was an alluring mix of risk and reward, a potent cocktail that has since been consumed my millions of salespeople.

The first salesmen that came off the farm were door to door salesmen. And in fact, Mark Twain sold many of his works by employing War Veterans to go door to door selling his books to homeowners and farmers.

What I find remarkable about this is that I went into sales in 1999, it was for many of the very same reasons that those farmers did, and the promises that was made to them are still as intoxicating to anybody who would answer the call to join sales today.

Not unlike those farmers, if you are not highly educated or you don’t come from a wealthy family, and are not considered worldly, but you do possess good character, a strong work ethic, an appetite for adventure and teachable spirit then you too can travel the world and meet incredible people and make a wonderful life in sales.

This job can literally take you from the street to Wall Street. The Pursuit of Happiness is a true story, and your story could be just as remarkable too.

Sales is one of the oldest professions in the world, do not let anyone tell you that sales is dead, sales is what drives the global and national economy and without it, society would cease to function.

What role do you think sales will play in rebuilding the SA economy in the foreseeable future? List 5 points/reasons why sales is vital to economic growth.

JOIN ME TO LEARN MORE…

If you enjoy learning about the Story of Selling, I am delighted to share that we will be delivering two episodes per week. You will learn useful info, fascinating stories and hopefully leave feeling a little uplifted.

Be sure to subscribe so that you don’t miss the next installment! 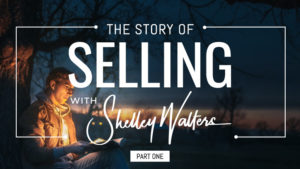