How the Term ‘Snake Oil Salesman’ Came About 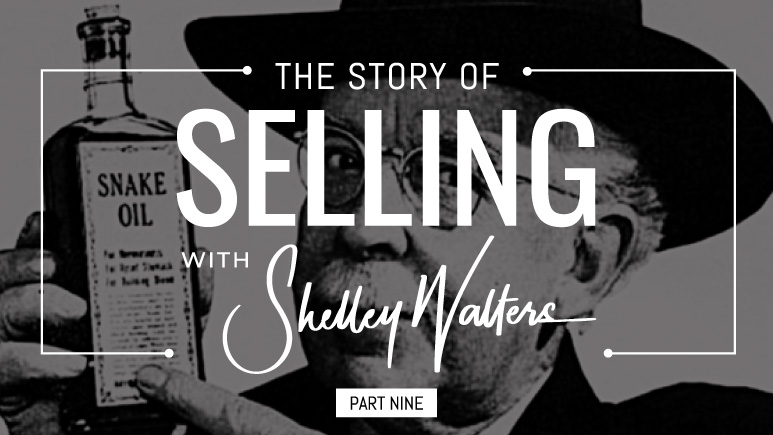 Even as we emerge slowly from Covid-19 to varying degrees around the world, you may be feeling anxious about the future of selling and what this new post coronavirus world means for you, and for your business

This week we look at the origins of the infamous ‘Snake Oil Salesman’ term, where it originated and why it is still used today.

Seeing Should Not Always Be Believing

I just have to share this story. We all know, or have heard of the term, ‘Snake Oil Salesman’, but very few of us actually know where it originated from – the tale is incredible and may leave you with some great insights for the next time you hear it – or it comes up in a game of Trivial Pursuit!

A ‘Snake Oil Salesman’ according to Wikipedia ‘is a euphemism for deceptive marketing’ and basically is used to refer to anything being marketed as legitimate, which is anything but.

The term originated in the mid-1800s when a vast number of Chinese immigrants moved to the United States as indentured labourers, many of them from poor families and contracted in to long contracts for very little pay, to work on the Transcontinental Railroad which was breaking major ground at the time.

The Chinese railroad workers brought with them various traditional medicines, one of which was the infamous snake oil. The original oil was which was used to treat inflammation, arthritis, and other strains to joints and muscles from long hours on the railroad was made from the Chinese water snake, which due to its high omega-3 acid content was highly effective.

The workers would apply the oil on their joints after a long hard day of intense physical labour. The story goes that the Chinese workers shared the oil with some American counterparts, who marvelled at how effective it was.

So how did an effective medicine become a global symbol for fraud?

So, as word of the true potency of snake oil grew, Americans wondered how they could make their own snake oil – but obviously Chinese water snakes are hard to come by in America. Although not to be defeated some healers started to use rattlesnakes to make their own versions of snake oil.

Obviously, at the time there was no way of hearing honest reviews from past clients, there was no resource such as Trust Pilot and Hello Peter. False claims and fake medicine were more readily available than anything that might actually work – and cue the entrance of entrepreneur Clark Stanley, aka The Rattlesnake King.

In an 1897 pamphlet about Stanley’s life and exploits, the former cowboy claimed he had learned about the healing power of rattlesnake oil from Hopi medicine men, and proceeded to cause a huge stir at the 1893 World’s Exposition in Chicago when he took a live snake and sliced it open before a crowd of onlookers.

An onlooker described how he “reached into a sack, plucked out a snake, slit it open and plunged it into boiling water. When the fat rose to the top, he skimmed it off and used it on the spot to create ‘Stanley’s Snake Oil,’ a liniment that was immediately snapped up by the throng that had gathered to watch the spectacle.”

But – there were two major problems with Stanley’s claim about his oil:
First, rattlesnake oil was far less effective than the original Chinese snake oil it was trying to emulate. As it turns out, Chinese oil contained almost triple the amount of a vital acid as did rattlesnake oil, hence the product did not work.

Secondly, and more importantly, Stanley’s Snake Oil did not actually contain any snake oil at all. The Pure Food and Drug Act of 1906 sought to clamp down on the sale of patent medicines and it was that legislation that led to Stanley’s undoing. After seizing a shipment of Stanley’s Snake Oil in 1917, federal investigators found that it primarily contained mineral oil, a fatty oil believed to be beef fat, red pepper, and turpentine. That’s right — Stanley’s signature product did not contain a drop of actual snake oil, and hundreds of consumers discovered that they had been had.

Stanley, of course, was fined for violating the Pure Food and Drug Act and “misbranding” his product by “falsely and fraudulently represent[ing] it as a remedy for all pain.”

Salesmanship and Entrepreneurship are often confused, and one does not even have to go as far back as the above story in history to find examples of salespeople who have attempted to go into business, overestimating their powers and underestimating the importance of product and service quality.

We can certainly learn from Clark Stanley and his false claims, and although the phrase and the story is amusing, there is a much deeper lesson for us all to remember and that is that the integrity of your message and the effectivity of your offering are always going to be essential to sustainable sales success.

The conviction that comes from knowing your product works is essential to your sales success. So are the referrals that come from satisfied customers.

Consider your products and services, what is the impact they have on the lives and or businesses of your customers?