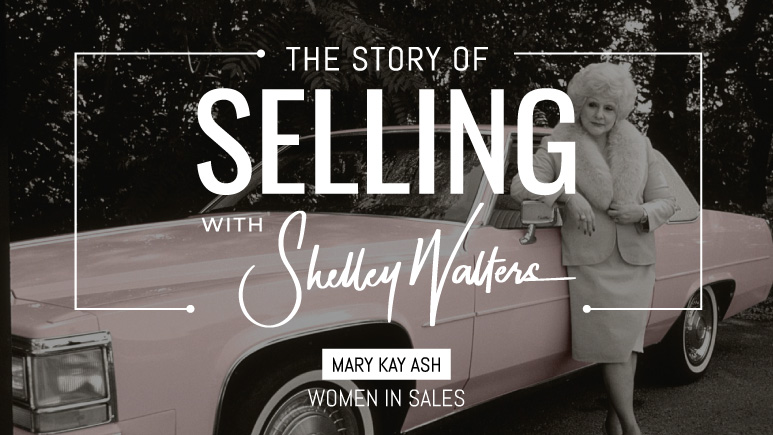 This Women’s Month we want to introduce you to some awe-inspiring saleswomen, business owners and industry pioneers, women that left their indelible mark on The Story of Selling and made this profession one of the most enjoyable professions a woman can participate in today.

To add a bit of a feminine fire to our list of giants, Mary Kay Ash joins the list as one of the modern founders of sales, done with such style and elegance, that she remains one of the greats up until today! Her legacy has made many a wealthy and successful woman.

Born in Texas to a middle-class family Mary Kay (Born Mary Kathleen Wagner) completed school and got married to raise her family. During the war, while her husband was serving in the army, she had sold books door to door to make ends meet, and it was here that her sales skills began to be honed.

After the war, she worked for Stanley Home Products where she hosted demonstration ‘parties’ of the companies’ products to homemakers like herself. In a world were women did not often work outside of the home, this was in itself groundbreaking and after some years at Stanley Home Products and then at The World Gift Company, the intelligent and hardworking Mary Kay quit her job – frustrated after continuously being passed over for promotions, to the men that she had trained.

Her intent was to write a book aimed at women, to equip them with business skills and acumen to allow them to compete with their male counterparts in the business world, however other things transpired for this powerhouse, although she did release several books, including her autobiography, later in her life.

In 1963 she launched Beauty by Mary Kay, a business set to equip and empower women in a business environment, with a loan of $ 5000 to get started, and with her younger son stepping up to the managerial plate, taking up the reins of the business alongside his mother.

The business opened with one shopfront in Dallas, Texas and from there grew in leaps and bounds. The company and business model run by women for women was a first of its time and once again leant on the sales principle of using your friends and neighbours, connections that you knew, to sell to – all the while equipping women with the skillset to become financially empowered.

Bringing her nurturing nature to Her business she founded her business model and sales culture thrived on reward and recognition – from acknowledging her top sales team members to annual training and recognition seminars, to incentivising her salesforce with vacations, jewellery and even motor cars (yup – those iconic pink Cadillac’s) and with goals like these to aim for her ladies steadily upped sales figures year on year, and Mary Kay Cosmetics boomed and soared.

Mary Kay and her partners, which included her son, Richard, took the multi-level marketing company public in 1968 and she remained active in Mary Kay Cosmetics, Inc. until suffering a stroke in 1996.

Her son Richard was named CEO of Mary Kay Cosmetics, Inc. in 2001, and after his mother’s passing continued the legacy she had put in place. As of 2014, Mary Kay Cosmetics had more than 3 million consultants worldwide and wholesale volume in excess of 3 billion. Mary Kay herself was honoured as a leading female entrepreneur in American history, along with a number of other prestigious awards received both during her life and after her passing.

Her well-known quote “Everyone has an invisible sign hanging from their neck saying, ‘Make me feel important.’ Never forget this message when working with people” is one that is still so relevant today as it was back then and stands testament to a groundbreaking, game-changing and out of the box thinking Mary Kay we went boldly and without asking for permission.

Mary Kay left her employment and went out on her own because she was not being recognised for her talent. She never asked for permission, what would you do if you were not at all concerned about what others think?

Write down 3 things you would do differently if public opinion did not matter at all.