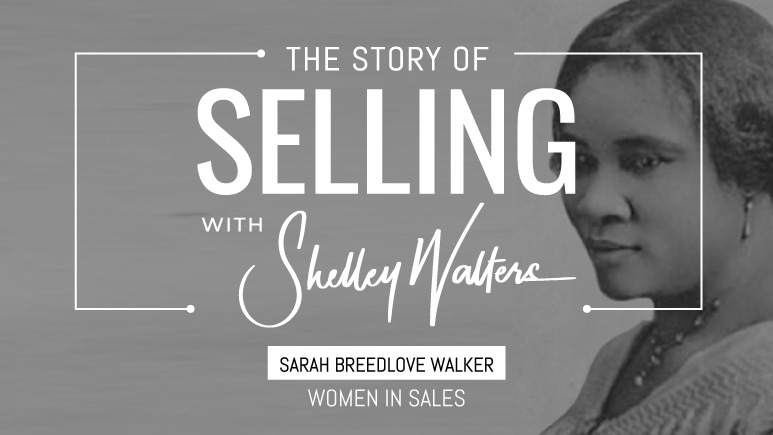 The story of Sarah Breedlove Walker and her tenacity and grit has always inspired me, and I hope it will do the same for you. Sarah was a businesswoman and a philanthropist, as well as the very first black female millionaire in the United States – her wealth built through an international beauty business which had over 25,000 active sales agents by the year 1919.

In a time when women were not offered as much choice and as many options as they are today – the stories of ladies who shaped their own future and made their own mark in a ‘man’s world’ always offer so much to learn from, and also to recognise just how far we have truly come.

Born to two former slaves on a plantation in Louisiana in 1867, Sarah Breedlove was the first of her family to be born free – yet by the age of 7, she found herself an orphan working in the same cotton fields that her parents had worked in and that her brothers and sisters now worked in to support themselves.

Unhappy and abused by her brother-in-law, Sarah escaped and got married at 14, having a daughter with her husband, before he died. After his passing Sarah moved to St. Louis to join some of her brothers who were working as barbers there, and started out as a laundress and cook, scraping together enough money to educate her daughter, Leila.

After a number of years she was still on her hands and knees scrubbing clothes and realised that she could not do this for the rest of her life, as you needed to be young and fit to scrub with such vigour, and with a young daughter to take care of she had to innovate and make a plan.

Sarah was also bemoaning the fact that she was losing her hair, as in those days most American’s did not have indoor plumbing and in fact bathing as a whole was considered a luxury, Sarah and many other ladies were, in fact, losing their crowning glory due to infrequent washing and lack of haircare.

Sarah’s business journey started in 1904 when she happened to discover Annie (nee Turnbo) Malone’s “The Great Wonderful Hair Grower”. (The recent movie ‘Self-Made’ focusses on Annie’s story – however, many argue, and research points towards the fact that Sarah was actually the first self-made African American millionaire.)

The products worked and Sarah went from a product user to an impassioned product seller, as a local agent for Annie Malone. At the same time, Sarah met her last husband, Charles Joseph Walker, a savvy salesman for the St. Louis Clarion – coincidence?

In those times, people of African heritage were not allowed access to trade unions and could not get bank loans or capital, effectively docking them into a certain pay grade and standard of living, which would ultimately be how the rest of their life would remain.

One of the ways out of this was to start a business in an industry such as hair care and cosmetics, which involved low start-up costs, spoke to a large portion of the population and fulfilled a need that was not being met. Annie Malone had already made inroads here, creating her haircare products, and around this time there was a spate of black-owned businesses being created. Sarah saw her gap…

Sarah relocated to Denver, married Charles, and changed her name to the rather posh sounding ‘Madam C.J. Walker’. Supposedly Sarah had a dream one night, which shared with her all of the ingredients that she would require for her fabulous new haircare products – some of  them were only grown in Africa, however, she ordered them, created her product and in her own words states, “in a few weeks my hair was coming in faster than it had ever fallen out.”

Her initial investment was only US$ 1.25 and from that investment ‘Madam Walker’s Wonderful Hair Grower’ was born.

She was met with resistance by many, yet rode the wave and structured her marketing campaign around the fact that although the product was for straightening hair (a concept that could be misconstrued as a desire to not embrace one’s natural hair) she focussed (focused) on the fact that her product was divinely created (through the dream she had had) and also claimed that the most important ingredients for her product were African in origin – standing her good stead with her customers.

Sarah sold her magical hair grower everywhere – door-to-door, and at local at churches and club gatherings, and even through a mail-order catalogue. She proved to be a bit of a marketing whizz, not only selling women her hair products but selling them a lifestyle – and a dream!

This concept of total hygiene and beauty for women was something totally new – something that made ladies feel confident and attractive and in a better position to advance themselves in life, and utilising the growing number of independent black newspapers, Sarah got the word out via her creative adverts, and she was literally everywhere with her before and after photos that stood testimony to her products and their efficacy.

Using her own savings Sarah opened the Walker Manufacturing Company in 1910 and also opened a state-of-the-art factory in Indianapolis with a training academy as well, where ladies could train and receive hair care certificates, thereby sharing her knowledge and growing her reach.

A key item to note here is that Sarah let her customers do the talking, that word of mouth recommendation is something that to this day just can’t be beaten and her agents earned good commissions, so enthused were they by the chance to make money and raise themselves and their families out of poverty – this concept was a groundbreaker in its day, and one that helped Sarah to not only break the mould but to make history, all through her desire to not only better her life but also to better the lives of others, coming from a true place of compassion and education.

She was often imitated, but she kept on innovating. After all, there could only ever be, one Madam C.J. Walker…